8 Recommended Tools and Services for Streamlining Your Workflow

(I sincerely apologize for that cliched title, by the way. The only other options were far, far worse. You can leave me suggestions for a better one in the comments if you want.)

I really enjoy testing applications and services. I like seeing if they make a difference in my workflow, if they improved my life in some meaningful way. And I really like to see if they solve problems I didn’t know I had.

But, it’s selfish to keep all these goodies to myself, so I’ll show you some of my favorites as well as my recent additions to the line-up. If you try nothing else on this list, you must try this service. I’ve been a beta tester for the last few months, and they just opened to the public on April 25th.

Basically, the idea is that you’re more productive if your brain is in a relaxed and alert state. But most music is meant to arouse. So the smarty-pants’ at Focus at Will have researched, remastered, and developed hundreds of tracks that help your brain get in that flow state and stay there.

I say this as a person who hates music and listening to music, especially when I’m working. But the music, meant to be played low and quietly, relaxes you slightly without making you drowsy, and never intrudes (in fact, if you notice it, you should click skip on the program, and it will learn that that piece is not quite right for you).

They say that this technology works on two out of three people. So maybe it won’t work for you. But all I know is I can’t bear to be without it. 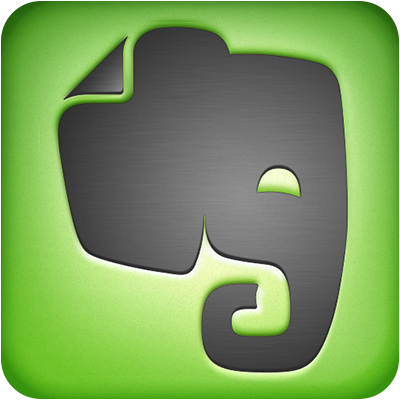 I was first introduced to Evernote three or four years ago. It’s been on my radar a while. But when I tried it way back when, it wasn’t nearly as robust as it is now. I don’t remember a desktop application, for starters. And at the time I only had dial-up and apparently I was dealing with a lot less information (it seems hard to believe, now) because I couldn’t quite figure out what to do with it.

Now, however, I’ve run my business almost wholly online for more than two years (since my last truly meat-space business got shuttered)— and most of that work is done in a web browser. I never use MS Office, having found love in the integrated Google universe. In fact, it wasn’t so long ago that I was telling Ethan that I didn’t even use my desktop at all.

But at a recent Mastermind discussion of business systems, I realized that I needed a business dashboard. I needed to be able to have project plans, research, documents and notes all in one place. Google Documents didn’t work for that. For a time I used folders of bookmarks, but that still didn’t quite work– it was clunky and slow and hard to update.

So, I wrote out my needs for a dashboard and looked at my options, and it turned out the ubiquitous Evernote was perfect. And when I grow, I can easily upgrade to Evernote Business and share SOPs and checklists with my XO.

As I also mentioned, Evernote is a great place for my journaling. In fact, I start each day with two notes: “Todo [DATE]” and “Morning Pages [DATE]”. The ToDo contains the top project or two I’m working on and a handful of other little tasks I don’t want to forget. The morning pages note gets jottings put in it all day so that I don’t have to open the project files I’m not working on, and then at the end of the day or week, I sort all those jottings where they belong.

If this sounds like something you’d like to implement  I recommend Evernote Essentials by Brett Kelly. It’s worth the $30 bucks to get up to speed on what all Evernote can do rather than spend your time figuring it out. If you want to spend your time messing with things, mess with the specific integrations to services you already use. I spent about 4 or 5 days getting things set up. (I still have a big backlog of things to organize, but you really can’t go at this haphazardly. You’ll just waste your time.) One of the Evernote integrations  I mentioned, Expensify is a nifty little service. I wound up not using it, but it has merits that should not be overlooked.

At the core, Expensify is an expense tracking service. You know, where you take a picture of your receipt for a business lunch and it automatically files it for you, so you can find it when you go to do your bookkeeping. It links to Evernote as well as various invoicing softwares, so you could conceivably link up all your business books (or even your household books) to it.

But the cool thing about it is that for 20 cents each, Expensify has a “SmartScan” function where it reads the receipts and enters all the information into a spreadsheet for you. There’s no flat fee, just 20 cents (after the first ten, which are free.) Now, if you want to enter it all manually, Expensify is free. FREE. And I would assume that’s where they get you— after a few months, you can’t imagine why you’re wasting time doing it by hand, and you start using the SmartScan feature.

Like I said, I would up not using it because my bookkeeping is already so streamlined and automated, and it’s not worth the trouble to switch, but if you’ve been wanting to keep better track of receipts and expenses and you haven’t been able to, you might want to look into Expensify.

I liked Instapaper. I really did. I’ve used it for the last year or so. But it didn’t integrate with The Old Reader (below) and Pocket did. I was still a little torn, but then I realized The Old Reader didn’t have an Android app, and Instapaper had an Android app, but it was paid, and Pocket had a free Android app. So that’s what tipped the balance for me. (I don’t mind paying for what I use, but my phone already costs me $55/month, which is excessive for the 4-5 days a month I really need it.)

And it turns out I like Pocket’s colorful interface better than Instapaper’s. The previews make it a lot easier to decide what to read. The various integrations are a little bit hard to manage— there’s no search function, you just have to scroll until you find what you’re looking for— but once you get things set up, it’s a breeze to use.

I know many of you are looking for a replacement for Google Reader, and I want to recommend my pick The Old Reader. It’s basically a clone of the old Google Reader interface. No learning curve, no fancy doodads or interface. Just all your feeds in one place.  Some parts of it, like their “Add New Feeds” function, is even easier to manage than Google Reader was.

It’s one of those garage-based start-ups, they’re only a year old, but they’re very responsive and run on donations. That’s not to say they’ll always be free, but I’m all right with that. Google’s got us spoiled that everything should be free, but you know what they say: If you don’t pay for the product, you are the product. I hope they have an Android app soon, though.

Because they’re so small, they don’t refresh the feeds lightning fast– I’d say there’s a 6-10 hour lag for some feeds. But as far as I’m concerned, that’s just fine. If I needed these posts the second they were posted, they’d be coming to my inbox. And speaking of inbox management…

This is a great service I heard about from Erin. I can’t quite bring myself to unsubscribe from a lot of stuff, but I have Inbox Zero OCD, which means that even when emails land in my mailing list folder, I still must mark them as read. It’s a sickness, I’m telling you.

So what unroll.me does is scoop them up, mark them as read and give them back to you in a list view at one point in the day (morning, afternoon, or evening, your pick).

I’m not a fan of the interface, and the fact that when you open the individual emails, it opens them on the unroll.me site but I do like that I can unsub with ONE CLICK. Somehow, not getting redirected to a bunch of different screens reduces my regret quotient, so hopefully I will whittle down my mailing lists subscriptions to the ones that I actually read… at which point I won’t need unroll.me anymore. Because ugh. The interface is way too… what’s the word… tablet-y for me. You know? Like suddenly now that we have touch screen we HAVE to have tiles and sliders and you can’t tab around things, you have to use your mouse. What is this, Web 3.0 now? Whatever it is, I don’t like it.

This is a great app if you have to load media or news sites and the page crashes because of the ads. It’s not an ad-blocker, it just prevents Flash from running on a site unless you specifically allow it. Since I never watch embedded videos, this has increased page load times immensely. You can whitelist certain pages (like Focus@Will!) and all media is available to you with a single click, so it’s very unobtrusive, unlike this next extension.

I don’t use this all the time, but the StayFocusd extension for Chrome is a good way to train myself out of surfing websites. (You can also try Leechblock for Firefox and Self Control for OSX. IE users, you appear to be SOL.) Typically I’ll use it for a few weeks, then disable it, then enable it again when I notice myself backslide.

It’s super customizable, with whitelists, blacklists, a “Nuclear” feature, which blocks everything but the whitelist for a given period of time, and even a feature where you can spend a limited amount of time on unproductive sites (like for breaks and things.)

I’m noticing a big trend amongst start-ups for tracking and responding to even random blog posts about their services (You might have seen the LiveFyre liaison in the comments from time to time!) so if that’s you, welcome!

But tell me, what services or apps have made your life easier or more manageable? I’m always looking for new stuff to test!

Next post: The Art of Consolidation: Keeping What You’ve Captured

Previous post: Channel Your Inner Giant-Killer When Your Back Is Against The Wall